Why does RWIs (P2P Chunks) decrease

can anybody explain why RWIs (P2P Chunks) is decreasing?
Does this mean, submitted RWI chunks are deleted from local system?
Or is this some kind of queue? 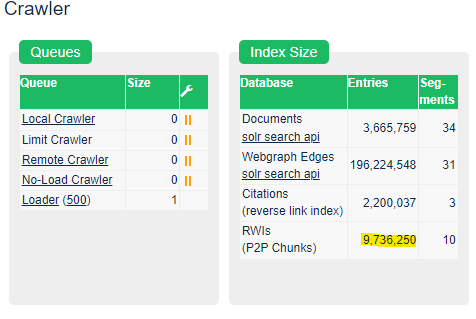 Thats right and a wanted behaviour: YaCy maintains two indexes, the RWI (“Reverse Word Index”) and the Solr Index. The RWI is the distributed Word Index that is generated and then waits to be distributed to other peers according to a distributed hashtable schema. The target peers then host the RWIs again while on your own peer the RWI is deleted.
That results in larger RWIs on the target peers but on a smaller number of RWIs on your peer. That is not a contradiction: it increases the size of some of the RWIs but decreases the number of RWIs. That applies to all peers.